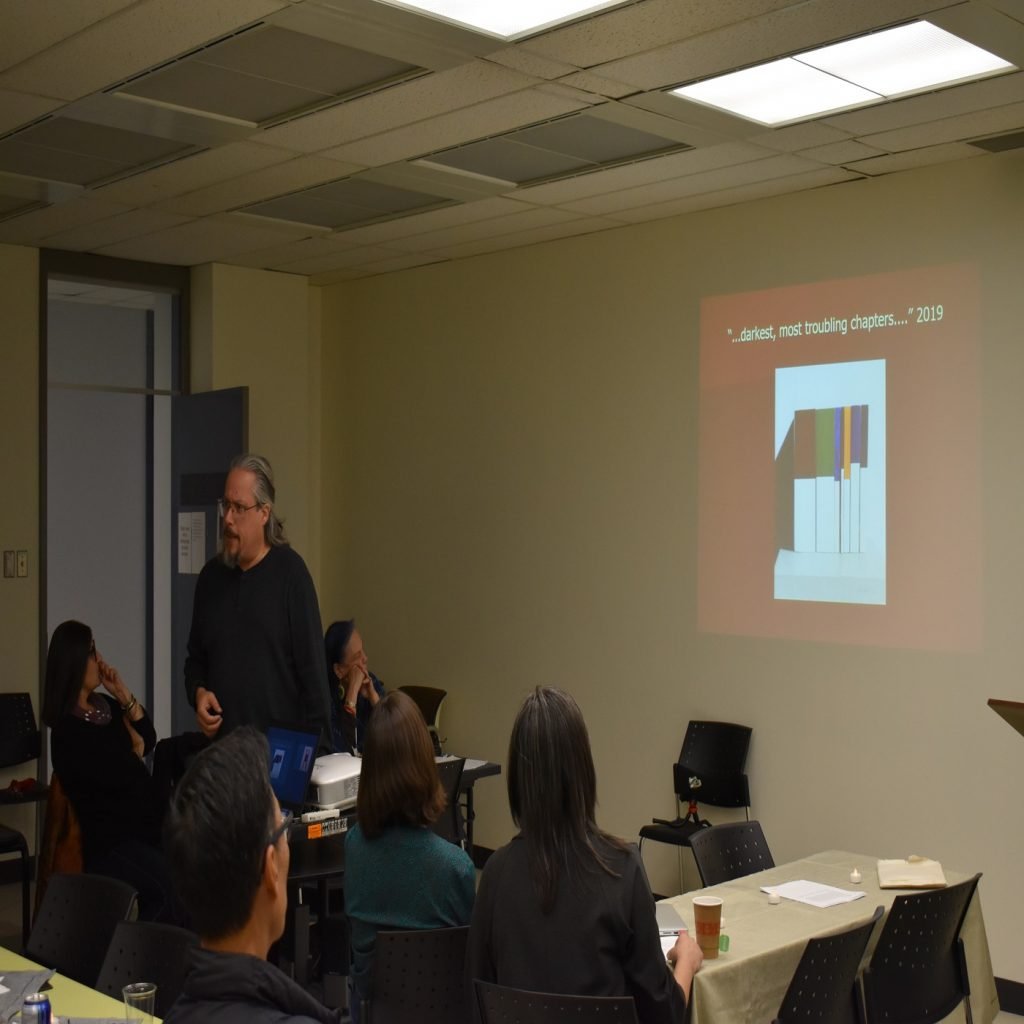 This episode records the last gathering of the Wisdom Council during a TIA House symposium in September 2019. In this podcast, the members of the council, who are mostly BIPOC senior practitioners, read and discuss some of their works. The speakers engage with issues such ‘how to be a writer,’ land acknowledgement, Indigenous communities, and institutional madness. You will listen to Lillian Allen, Fred Wah, Lenore Keeshig, David Garneau, Smaro Kamboureli, Chrystos, Aruna Srivastava, and Richard Fung.

Lillian Allen is a professor of creative writing at Ontario College of Art and Design University (OCADU). Multi-disciplinary and experimental, Allen’s creativity crosses many genres including radio, theatre, music, and film; as a writer, featured artist, and producer/director and national radio show host. Allen is a recognized authority and activist on issues of diversity in culture, cultural equity, cross-cultural collaborations, and the power of arts in education and has worked locally, nationally, and internationally in this capacity. Her eclectic, insightful, and inspiring lectures and performances have taken her as far as Jamaica and Switzerland. She has also held the post of distinguished Writer-in-Residence at Canada’s Queen’s University and University of Windsor.

Fred Wah began publishing poetry in the 1960’s as part of an international avant-garde movement located in Vancouver. His early poetry is improvisational and experimental, based partly on his interest in jazz. Yet it is also deeply rooted in the geography of the Nelson area, as his first seven titles show: Lardeau, Mountain, Among, Tree, Earth, Pictograms from the Interior of B.C., and Loki is Buried at Smoky Creek. In the 1980’s Wah’s focus shifted to his mixed-race history in Breathin’ My Name with a Sigh and Waiting for Saskatchewan. With the publication of Diamond Grill (1996), a biofiction based on his experiences working in his father’s café. He has received major literary awards such as the Governor General’s and Alberta’s Stephanson awards.

Lenore Keeshig is a citizen of the Saugeen Ojibway Nation on the Saugeen Bruce Peninsula, and resides on Neyaashiinigmiing (home to the Chippewas of Nawash Unceded First Nation). Lenore is a storyteller, poet, award-winning author, naturalist, mother, grandmother, and great grandmother. Her long-awaited first collection of poetry Running on the March Wind was published in 2015. Currently, she works delivering programs that teach about the natural and cultural history of the peninsula and the Great Lakes and helps area visitors to better understand their connections to the land and water.

Smaro Kamboureli joined the Department of English at the University of Toronto as a Professor and as the inaugural Avie Bennett Chair in Canadian Literature in 2013. A specialist in contemporary Canadian literature and criticism, she was a Canada Research Chair (CRC) Tier 1 in Critical Studies in Canadian Literature in the School of English and Theatre Studies at the University of Guelph (2004-2013). Her CRC research project included founding and directing the TransCanada Institute, organizing three international and interdisciplinary TransCanada conferences, and initiating collaborative research on the methodologies and institutional structures and contexts that inform and shape the production, dissemination, teaching, and study of Canadian literature.

Chrystos is a Menominee poet and activist and was born in San Francisco. In her work, she examines themes of feminism, social justice, and Native rights. She is the author of several collections of poetry, including Not Vanishing (1988), Dream On (1991), and Fire Power (1995). Chrystos’ work has been featured in the anthologies This Bridge Called My Back: Writings by Radical Women of Color (1981, edited by Cherríe Moraga and Gloria E. Anzaldúa) and Living the Spirit: A Gay American Indian Anthology (1988, edited by Will Roscoe).

Aruna Srivastava has spent many years working as an anti-racism educator in various community-based, arts, and academic contexts, focused in more recent years on the complexities and intersections of disability, illness, age, and trauma in this work. As a racialized arrivant/settler, who has been a guest in many Indigenous lands across the world, she has found a home for quite some time here in what the Blackfoot called Moh’kins’tsis in Treaty 7 territory. Aruna has in the past twenty years or so also been on a journey to work in alliance with Indigenous peoples; this has shown her better and wiser ways to work both within and against colonial structures, such as universities, arts institutions, and non-profit organizations. The work of (re)conciliation engages her specifically in that it requires storying and storing or archiving memory in many forms—and repudiates forgetting.

08:27 – Lillian Allen presents a reading on how to be a writer

20:19 – Fred Wah reads from the project beholden: a poem as long as the river, with Rita Wong

28:05 – Lenore Keeshig presents a reading on the creation of butterflies

33:21 – David Garneau speaks on the meaningfulness and deepening of land acknowledgements

48:46 – Aruna Srivastava discusses the work of Sharron Proulx-Turner, the book Creole Métisse of French Canada, Me, and the legacy of Proulx-Turner’s writing

56:42 – Richard Fung discusses the film Nang by Nang, dealing with mixed-race identity, “a question of family, and how we think of family”

We recognize the generous support of the Canada Research Chairs program and the Social Sciences and Humanities Research Council. We also appreciate the support of the Faculty of Arts and the Department of English at the University of Calgary, where our offices are housed, as well as the guidance of Marc Stoeckle at the Taylor Family Digital Library. TIA House is run by Larissa Lai, Mahmoud Ababneh, Rebecca Geleyn, Paul Meunier, Joshua Whitehead, Aruna Srivastava, Marc Herman Lynch, Marj Rugunda and Ryan Stearne.

Our music is “Monarch of the Streets” by Loyalty Freak Music.