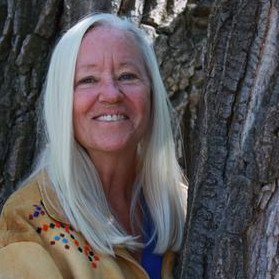 Creole Métisse of French Canada, Me: A Symposium in Honour of Sharron Proulx-Turner

Creole Métisse of French Canada, Me: A Symposium in Honour of Sharron Proulx-Turner

This symposium honours the work of métisse writer and elder Sharron Proulx-Turner, who passed away last year. Her last book Creole Métisse of French Canada, Me was posthumously released this year by Kegedonce Press. The first publication on the TIA House webzine was, in fact, work Sharron gave us. In her last days, as we sat with her to visit, celebrate her life, hang out and reconnect, especially in those moments when we couldn’t hide our sadness, she promised to haunt us. And indeed, she does. So rather than say Sharron was a storyteller, let us say she is and will always be a storyteller, mentor, friend, aunty, mother, Nokomis, lover, poet, and singer who carries the immense powers of love, healing, story, and community-building in the face of sexual abuse, colonialism, and trauma. This symposium takes up the three themes addressed in the title of her book: creolization/métissage/intersectionality, Métis Nationhood (Red River), and the self. We can understand small métis broadly as the French word for “mixed.” The first panel addresses mixings and intersectionalities. We open the door to address and honour understandings of mixing and crossing, certainly in sense of “mixed-race” and intersectionality broadly, but also combinations, concatenations, collaborations, and elaborations in their widest sense, through and beyond the complications of the racial. In the second panel we address embodiments, experience, history, culture, and politics as they attach to Métis Nationhood, and specifically Métis cultures and knowledges as connected to the Red River Settlement in what is now known as the province of Manitoba. Certainly, the Red River Resistance is important. This panel is also interested in contemporary Red River stories, communities, diasporas, apocrypha, and more. Finally, through the “Me” of the book’s title, this symposium addresses the body of Sharron Proulx-Turner’s work and life, particularly but not exclusively its autobiographical and biotextual aspects.

(Subject to change. All events at TIA House unless otherwise specified.)

Readings From Creole Métisse of French Canada, Me

Graham Scott Angus is a misplaced Métis, born in Ottawa, currently living in the Okanagan Valley. Sharron was his mum, he misses her dearly. A writer, artist, artisan and retired youth worker, Graham is currently reinventing himself, hustling coffee to make ends meet.

Fritz Bitz is a Metis woman whose family was involved in the fur trade with both the Northwest Company and the Hudson’s bay company. Family oral history included the flight following the Resistance to Montana and the return in 1897 with Amnesty to receive Scrip land in the Cypress hills in 1897 at which time the family received the government identification of Half Breed.  Fritz’s Settler ancestry includes both French and British with the addition of Ukranian/German by Fritz’s father; Indigenous known ancestry is Woodland Cree through the Grant family, but the ancestry of the Swain and Breland families is older and unknown. Fritz is a mother, grandmother, sister, aunty, friend, artist activist and would-be politician. ShaRRon was a huge influence in Fritz’s life, introducing her to Indigenous spiritual practice.

Victoria (Vicki) Bouvier is proud Michif-Métis born and raised in Calgary and a member of the Métis Nation of Alberta. Her ancestral connections are tied to the St. Francois Xavier community of the Red River and Boggy Creek, Manitoba. She is currently a sessional instructor at SAIT, MRU, and the University of Calgary. Vicki completed a Bachelor of Arts Degree in International Indigenous Studies, a Master of Arts Degree. She is currently a doctoral student in the Werklund School of Education at the University of Calgary.

Finalist for the 2008 Governor General’s Award for his second book of poetry, Noise From the Laundry, Weyman Chan divides his time between writing, family, electron micrographs, and nonsequitor fluxes in spacetime, brought on by insomnia…Skittles! As poetry editor of Calgary’s experimental literary magazine, fillingStation, he’s convinced that alien intelligence has already nested and fledged from every uttered branch of our language tree. His fifth poetry book, Human Tissue—a primer for Not Knowing— examines rage and the quest for origin.

Alicia Clifford is settler honoured to live on Treaty 7 land in Calgary, AB with her life partner, two teenagers, and their four-legged companion. Alicia is currently an MA student in the Department of Sociology at the University of Calgary. Her research interests include community engagement, criminal justice, experiences specific to Indigenous women, program evaluation from participant’s perspective, Indigenous and decolonial methodologies. Alicia is grateful every day for her adopted family (especially mom Sharron and sister Barb) who continuously provide gentle guidance and support on her journey moving forward.

Barb Horsefall is the daughter of Sharron Proulx-Turner, mom to 3 beautiful kids, Jessinia, Mazie-Anna and Ariston, wife to Harold and a Métis bead artist. She has recently begun her Master’s in Conflict Analysis and Management with a focus in lateral violence in the Indigenous Community. She currently works for the Calgary Board of Education as an Indigenous Advisor.

Liz Howard’s debut collection Infinite Citizen of the Shaking Tent won the 2016 Griffin Poetry Prize and was shortlisted for the 2015 Governor General’s Award for poetry. Her recent work has appeared in Poetry Magazine, Camera Austria, and The Fiddlehead. Howard received an Honours Bachelor of Science with High Distinction from the University of Toronto, and an MFA in Creative Writing through the University of Guelph. She is of mixed European and Anishinaabe descent. Born and raised on Treaty 9 territory in northern Ontario, she is currently the Canadian Writer-in-Residence at the University of Calgary.

Jade Mah-Vierling is a Master’s student in the Department of English at the University of Calgary. She recently presented at the 2018 Critical Mixed Race Studies Conference held at the University of Maryland. Jade’s thesis seeks to explore representations of mixed race subjects through the work of memoir, biotext and documentary; these three modes of “life writing” shed light on the way that the mixed race subject sees and produces himself or herself and as a result, how he or she forms an identity. Jade is working with celebrated writer and critic Larissa Lai on this project.

Dr. Yvonne Poitras Pratt is a Métis scholar whose family ancestry traces to the historic Red River Settlement and, more recently, to the Fishing Lake Métis Settlement in northeastern Alberta. Dr. Pratt was recruited to the Werklund School of Education in 2013 as an Assistant Professor after serving as Associate Director, Métis Education at the Rupertsland Institute, a Métis Centre of Excellence and her doctoral completion in 2011. Yvonne teaches at the graduate and undergraduate level, and has taught the mandatory Indigenous education course (EDUC 530) to pre-service teachers since 2013. She was the recipient of the Werklund Teaching Excellence Award in 2016, and the Students Union Teaching Excellence Award in 2017. Alongside her leadership role in the creation of the “Indigenous education: A Call to Action” graduate program in 2016, she continues to explore the potential of reconciliatory pedagogy.

Rain Prud’homme-Cranford PhD (Rain C Goméz): is a “FATtastically Queer IndigeNerd,” working within Indigenous and Afro-Indigenous Studies. Her co-edited collection Louisiana Creole Peoplehood: Tracing Post-Contact Afro-Indigeneity and Community is under contract with University of Washington Press, while also completing her monograph Gumbo Stories: Quantum Relation-Making and Decolonizing the Transnational South. Rain’s first poetry collection, Smoked Mullet Cornbread Crawdad Memory (MEP 2012) won the First Book Award from Native Writers’ Circle of the Americas and her second collection, Miscegenation Round Dance is under contract.  Rain has begun research on her next monograph titled “Remember the Red River Valley:” Transcontinental Red River Narratives of Métissage/Mestizaje & Indigenous Persistence, while completing her third poetry collection: FAT, and a collection of essays “I oughta know about lonely girls;” Essays on Love, Body, and Race.  She is co-Editor-in Chief, of That Painted Horse Press: A Borderless Indigenous Press of the Americas. Rain’s heritage/descent includes Louisiana Creole/Choctaw-Biloxi, Ishak, and Freedman paternally, and Alberta Métis and Celtic-American maternally.

Dr. Sharanpal Ruprai is Assistant Professor in the Department of Women’s and Gender Studies at the University of Winnipeg. She is an internationally recognized poet. Her debut book of poetry, Seva, was shortlisted for the Stephen G. Stephansson Award for Poetry by the Alberta Literary Awards in 2015; her second collection of poetry, Pressure Cooker Love Bomb, will be published in Spring 2019. She specializes in the experience of Sikh women and marginalized populations and she is working on a collection of essays entitled Who You Calling a Kaur? that will explore issues such as religion, gender violence, and identity, within the specific context of the Canadian South Asian women’s experience.

Aruna Srivastava: I count Sharron Proulx-Turner as one of my dearest friends, mentors, sisters. We met over a stolen mug in the very early 90s. Sharron worked with me in my first years at U of C when she was an MA student, as a teaching assistant, and on her thesis, which later became her first book, Where The Rivers Join. She was struggling with the “mad house” she writes about in her last book just as I was entered it, fuelled by visions of social justice and so much more. It is this house I have served, represented and struggled with in all of those years since, with her as my cheerleader and my critic. She always wanted me to write, because to write, for her, was how she survived, thrived, both apart from and part of her many families and communities. I learned from her how to articulate trauma, and that doing so is essential even when people turn away. We learned together that there is joy in creating, creation, and critique; in the kinship of mixed identities, Métisness, of two-spiritedness…and most especially that family is not about blood or even about the madness of choice: that how we story and create our relations and relationships becomes the foundation of what we learn, and teach, and of who we are.

Sable Sweetgrass is a writer/storyteller and filmmaker from the Kainai Nation in Southern Alberta. Sable got her BA in English from the University of Calgary and MFA in Creative Writing from the Institute of American Indian Arts in Santa Fe, NM.  Sable lives and works in Calgary/Mohkinstsis.

Joshua Whitehead is an Oji-Cree, Two-Spirit storyteller and academic from Peguis First Nation (Treaty 1). He is currently a doctoral student in the department of English at the University of Calgary (Treaty 7). He is the author of full-metal indigiqueer and Jonny Appleseed. 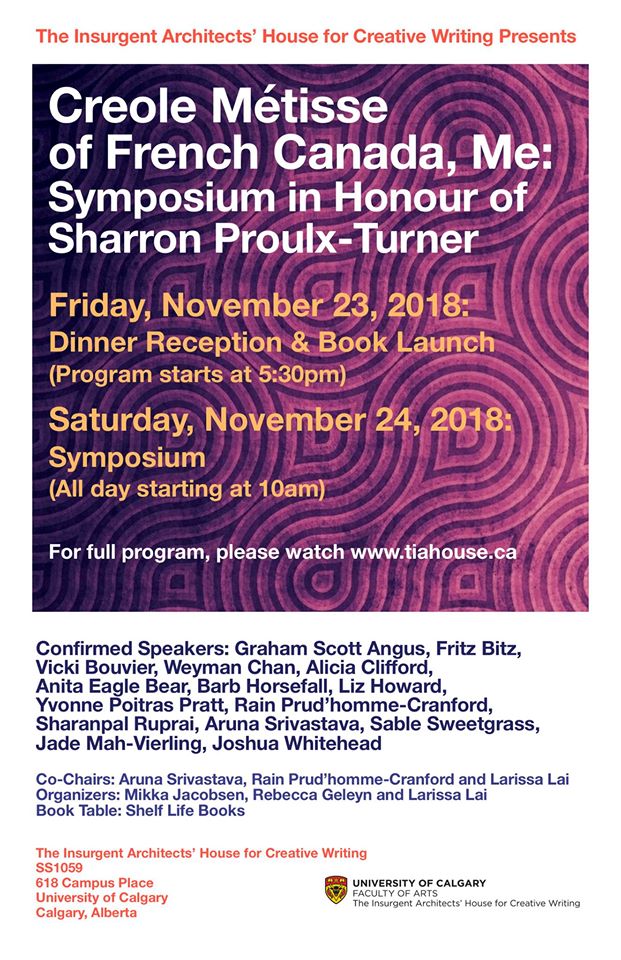