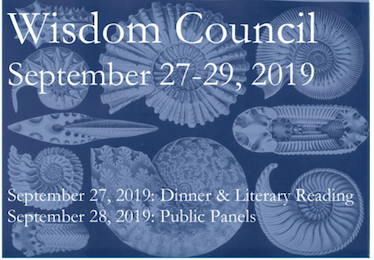 Using a combination of traditional and contemporary practices, this symposium brings together a small council of senior practitioners to address what our communities need now; memory and forgetting; care of elders in racialized communities; stories of the past, present and future; stories in cyclical time; community formations we’ve experienced; community formations we remember; how we understand the work that needs to be done; practices and strategies.

Smaro Kamboureli is Avie Bennett Chair in Canadian Literature at the University of Toronto. Her research interests include CanLit as a disciplinary formation and diaspora and Indigenous studies.

Aruna Srivastava has spent many years working as an anti-racism educator in various community-based, arts, and academic contexts, focused in more recent years on the complexities and intersections of disability, illness, age, and trauma in this work. As a racialized arrivant/settler, who has been a guest in many Indigenous lands across the world, she has found a home for quite some time here in what the Blackfoot called Moh’kins’tsis in Treaty 7 territory. Aruna has in the past twenty years or so also been on a journey to work in alliance with Indigenous peoples; this has shown her better and wiser ways to work both within and against colonial structures, such as universities, arts institutions, and non-profit organizations. The work of (re)conciliation engages her specifically in that it requires storying and storing or archiving memory in many forms—and repudiates forgetting.

B.C. poet Fred Wah’s most recent project is a collaboration with Rita Wong about the Columbia River, beholden: a poem as long as the river. Scree: The Collected Earlier Poems, 1962-1991 was published in 2015. High Muck a Muck: Playing Chinese, An Interactive Poem, is available online (http://highmuckamuck.ca/). He lives in Vancouver and on Kootenay Lake.

Lenore Keeshig is a citizen of the Saugeen Ojibway Nation on the Saugeen Bruce Peninsula, and resides on Neyaashiinigmiing (home to the Chippewas of Nawash Unceded First Nation). Lenore is a storyteller, poet, award-winning author, naturalist, mother, grandmother, and great grandmother. Her long-awaited first collection of poetry Running on the March Wind was published by in 2015. Currently, she works delivering programs that teach about the natural and cultural history of the peninsula and the Great Lakes and helps area visitors to better understand their connections to the land and water.

Chris Creighton-Kelly is an interdisciplinary artist, writer and cultural critic who was born in the UK of South Asian/British heritage. His artworks have been presented across Canada and in India, Europe, and the USA. Chris is persistently interested in questions of absence in the art discourses of the Western world: whose worldview is unquestioned; who has power; who does not? Chris also works as a consultant to many of Canada’s art organizations, institutions and agencies. He is currently co-director of Primary Colours/Couleurs primaires.
Chris appreciates his audiences a lot.

France Trépanier is a visual artist and curator of Kanien’kéha:ka and French ancestry. She is currently guest curator at Open Space in Victoria. France is also co-director of the Primary Colours/Couleurs primaires initiative, which seeks to place Indigenous arts at the centre of the Canadian art system. www.primary-colours.ca
France co-authored with Chris Creighton-Kelly Understanding Aboriginal Art in Canada Today: A Knowledge and Literature Review for the Canada Council for the Arts. She is co-chair of the Indigenous Program Council at the Banff Centre.

From her website: Lillian Allen is a professor of creative writing at Ontario College of Art and Design University (OCAD)… Multi-disciplinary and experimental, Allen’s creativity crosses many genres including radio, theatre, music and film; as a writer, featured artist and producer/director and national radio show host… Allen is a recognized authority and activist on issues of diversity in culture, cultural equity, cross cultural collaborations, and the power of arts in education and has worked, locally, nationally and internationally in this capacity. Her eclectic, insightful and inspiring lectures and performances have taken her as far as Jamaica and Switzerland. She has also held the post of distinguished Writer-in-Residence at Canada’s Queen’s University and University of Windsor.

Chrystos—from poetry foundation: Menominee poet and activist Chrystos was born in San Francisco. In her work, she examines themes of feminism, social justice, and Native rights… She is the author of several collections of poetry, including Not Vanishing (1988), Dream On (1991), and Fire Power (1995)…Chrystos’s work has been featured in the anthologies This Bridge Called My Back: Writings by Radical Women of Color (1981, edited by Cherríe Moraga and Gloria E. Anzaldúa) and Living the Spirit: A Gay American Indian Anthology (1988, edited by Will Roscoe). With Tristan Taormino, she coedited the anthology Best Lesbian Erotica 1999 (1999). Chrystos won the Audre Lorde International Poetry Competition and has received the Sappho Award of Distinction from the Astraea Lesbian Foundation for Justice. Since 1980, she has lived on Bainbridge Island, Washington.

9:30am: Opening Ceremony and Elder’s Prayer

10am – 11:30am:  How We Used to Do It: Anti-Oppression/Revolutionary Gatherings We Remember

*Please note that photographs and sound recordings will be made for website publication, podcast and TIA House archive. 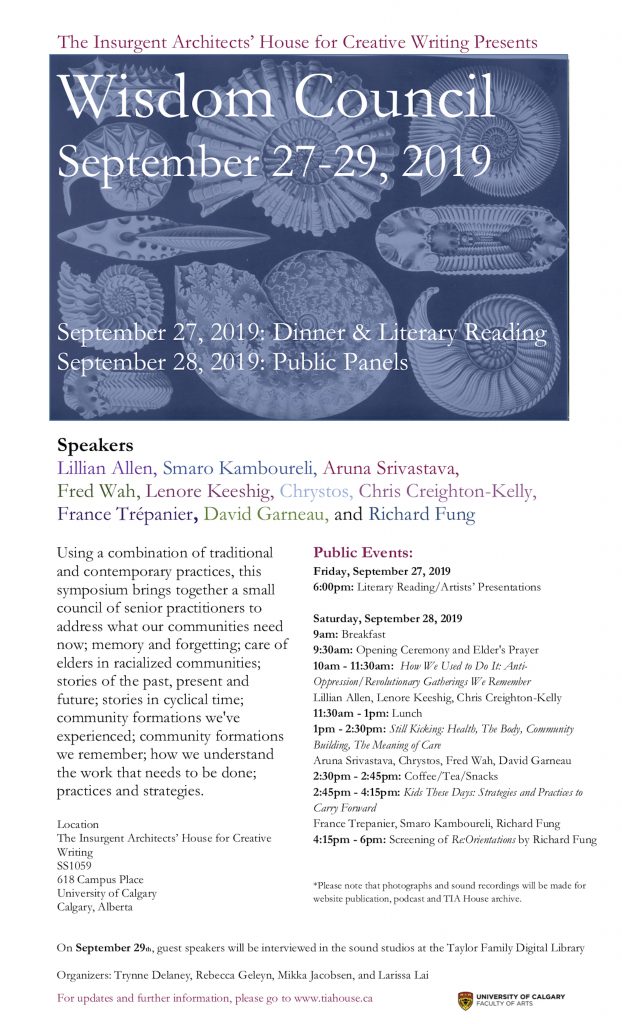