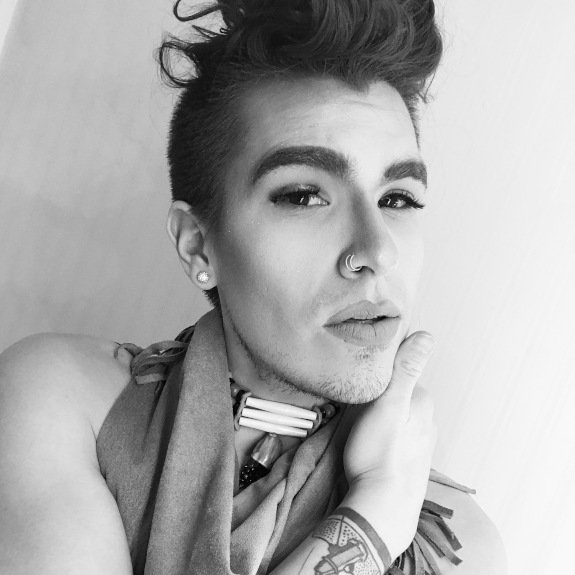 This past week, Joshua Whitehead was shortlisted for a Lambda Literary Award in the Trans Poetry category. In a moving act of radical kinship, he decided to pull out. TIA House is proud to publish his letter to the award organizers.

I am writing this letter in regards to my recent Lambda nomination for full-metal indigiqueer within the Trans Poetry categorization. May I first say, ninanâskomitin, thank you—I am humbled, honoured, and most importantly overwhelmingly touched by your recognition of my work, voice, stories, heart. As a caveat, I want to note I speak for myself as a 2SQ (Two-Spirit, queer Indigenous) person and not on the behalf of any of my kin. When I woke up on Monday, March 5th, and saw that I had been nominated I was overcome with emotion, small queer prairie NDNs like me never dream of being seen on such a large scale—ay hay. I recognize the difficulty of categorizing Two-Spirit (2SQ) within Western conceptualizations of sex, sexuality, and gender. I cling to Two-Spirit because it became an honour song that sung me back into myself as an Indigenous person, a nehiyaw (Cree), an Oji-Cree; I have placed it into my maskihkîwiwat, my medicine bag, because it has healed and nourished me whenever I needed it. To be Two-Spirit/Indigiqueer, for me, is a celebration of the fluidity of gender, sex, sexuality, and identities, one that is firmly grounded within nehiyawewin (the Cree language) and nehiyaw world-views. I think of myself like I think of my home, manitowapow, the strait that isn’t straight, fluid as the water, as vicious as the rapids on my reservation, as vivacious as a pickerel scale. I come from a nation that has survived because of sex and sexuality, as post-contact nations that deploy sex ceremonially. My gender, sexuality, and my identities supersede Western categorizations of LGBTQ+ because Two-Spirit is a home-calling, it is a home-coming. I note that it may be easy from an outside vantage point to read Two-Spirit as a conflation of feminine and masculine spirits and to easily, although wrongfully, categorize it as trans; I also note the appropriation of Two-Spirit genealogies by settler queerness to mark it as a reminder that Western conceptions of “queerness” have always lived due in part to the stealing of third, fourth, fifth, and fluid genders from many, although not all, Indigenous worldviews.

My work has aimed to remove queer, non-binary, trans, and intersexed Indigeneity from the ethnographic and anthropologic “was” of the Americas’ categorizations of Indigenous identities and to place it firmly into the “is” of our contemporary moments—but, furthermore, zoa, my cybernetic 2S trickster aims to propel us into a future unobscured and untouched by settler colonialism, to project us into a “to come” or a “to be,” into a world of our own making, a world wrought by Wovoka’s ghost dance, interconnected by Iktomi’s world-wide kinship web, and fluid as Nanabush’s augmentations. full-metal indigiqueer is a viral song, is a round dance, is a jingle dress, is maskihkîy (medicine).

There are words for people like me within nehiyawewin, words like napêw iskwêwisêhot (a man who dresses as a woman), iskwêw ka napêwayat (a woman who dresses as a man), ayahkwêw (a man dressed/living/accepted as a woman), înahpîkasoht (a woman dressed/living/accepted as a man), iskwêhkân (one who acts/lives as a woman), and napêhkân (one who acts/lives as a man). These, of course, may not be all the terminologies for what you may call “queerness” within Indigenous worldviews, but they are the ones I have been gifted and storied from folks such as Chelsea Vowel and storytelling with my kin—if there are more, or if I have these wrong, I apologize, settler colonialism has taken so much from our mother tongues. Within nehiyawewin we divide language into categorizations of animate and inanimate rather than masculine and feminine and it is through this that we hold ourselves accountable to all of our relations (of which we include things deemed “inanimate” by Western ways of being and knowing). full-metal indigiqueer is borne with that language in mind, my narrator, zoa, is a cybernetic virus that is agender, asexual, asexed because “queerness” is not a word we know, we know relationships and accountability and are birthed into our communities knowing our role and how it is we must contribute. I am an otâcimow, a storyteller, and I am making space for Indigenous folx whose language and identities do not fit within those paradigms; my narrator embraces fully the fluidity that 2SQ allows but doesn’t fully embody either/or and nor do I. To put it in the easiest terms for Western languages to understand, I live my life as a gay-femme and not as a trans Indigenous person.

I see my trans brethren and sistren who have paved the way for the trans categorizations to be included, recognized, honoured, and valued within Lambda, and only recently may I add, and I love them all the more for it. To be a trans woman, and furthermore to be an Indigenous trans woman, is a fight I do not know, cannot know, and do not seek to further violate and delimit. I stand by my trans kin fully and I, having lived through the intergenerational trauma of MMIWG2S (Missing and Murdered Indigenous Women, Girls, and Two-Spirit folx), the Sixties Scoop, day schools, and transracial adoption, know in my heart and spirits that I am not a proper candidate for this award. After much talk with my communities and kin I have come to the conclusion that I must withdraw my name and stories from this wonderful nomination because it is not my space to occupy—occupation being a story I know all too well. And while I am fully aware that Lambda’s categorizations do not require storytellers to self identify and instead base their nomination on content, this is not something I feel comfortable with. I need to walk through the world in a good way, to work towards miyopimatisowin, the good life, a good way of living. My stories are not written within a vacuum, I am simply an animated avatar, my stories are communal, reciprocal, gifted, pained, and healing. I need to walk my path as an otâcimow in this light, to be ethical, respectable, and most importantly, to give back to those who have supported, raised, and nurtured my voice—many of whom are trans women.

Instead, I dream of the day when award cultures, especially settler queer award institutions, etch out space for 2SQ capacities and oratories. So in nehiyawewin fashion, I animate myself: nehiyaw iskwewayi-napew, Cree femme-man, one who works like nîpiy, like water, because I come from the land of straits—I take a lesson from the land, manitowapow, and learn to eddy and etch, learn to break rocks and get them off, learn to carve out space from boulders that may consolidate in the wake. I remind myself that sometimes inclusivity can be spelled as accountability, sometimes literature sounds like “letting go”. I hear Beth Brant when I write this speaking to me, that “we do our work with love,” as much as I hear Chrystos’ cry that we are “not vanishing”.

So I conclude this letter with the highest of gratitude for Lambda, its judges, and to my publishers at Talonbooks both for seeing the tiny revolutions that weave maskihkîy within full-metal indigiqueer. I am deeply honoured that you have taken the time to recognize my work, ay hay.  To my fellow nominees I wish you nothing but the best and I celebrate your successes with love and pride—you are the resistance I always dream of. And I will exit this letter saying kihtwâm, a following, an again, a once more, because we never say goodbye in nehiyawewin—wâpwin nîkànihk, see you in the future, when queerness makes a little room for 2SQ folx to thrive and survive within. It is my hope that we can begin to have these much needed conversations about the state of 2SQness within, beside, and sometimes beyond, settler queerness, a story of emergence that has many times misguided, misrepresented, and failed 2SQ Indigenous folx at many turns throughout history—this is a ceremonial fire that has been burning since the docking of literature on Turtle Island and one I intend to keep alight.

Joshua Whitehead is an Oji-Cree, Two-Spirit storyteller and scholar from Peguis First Nation (Treaty 1). He is currently working towards a PhD in Indigenous Literatures and Cultures at the University of Calgary (Treaty 7). His debut book of poetry, full-metal indigiqueer, was released Fall 2017 from Talonbooks.